Positive Psychology: The Importance of Saying Thank You

We live fast-paced and stressful lives, and somewhere along the line, saying “thank you” has lost its value. In the chaos of the daily grind, these two little words are either forgotten entirely, or brushed off as contrived and meaningless social niceties.

However, studies suggest that expressing gratitude can improve your physical, mental, and emotional well-being, strengthen your social relationships, and help you cope with stress. Additionally, positive psychology research has consistently associated gratitude with greater happiness. 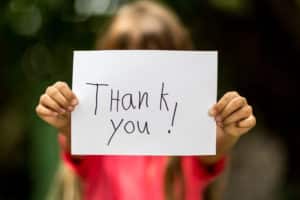 The impact of negative thoughts on depression

As part of our human development we are conditioned to seek approval and validation from others. When someone responds to us with negativity, we have a tendency to internalize their comments and judge ourselves harshly. People that suffer from depression dwell on this negativity, and struggle to separate themselves from the challenges that life inevitably brings.

Gratitude is an important way for people to appreciate the positive moments, and refocus their energy on what they have instead of what they lack. Although saying “thank you” might feel like an artificial social norm, it can significantly improve our state of mind.

After 10 weeks, there were observable differences among participants from each group. Members of the first group who wrote about gratitude were more optimistic, felt better about their lives, exercised more, and had fewer doctor’s visits.

In another study, Dr. Seligman from the University of Pennsylvania, asked over 400 participants to write about early memories and deliver letters of gratitude to people who had never been properly thanked.

After delivering these thank you notes, participants exhibited a noticeable increase in happiness, which lasted for four weeks.

Additional studies have found that couples who say thank you and express gratitude regularly feel more positive towards their partners and feel more comfortable expressing concerns.

The important role of gratitude

These studies demonstrate that there is a visible link between gratitude and joy, and that saying thank you is more than just a contrived social nicety.

Writing a thank you note, thanking someone mentally, or keeping a gratitude journal are all effective ways to deal with adversity.

Instead of dwelling on negativity, when we express gratitude we are refocusing our energy on the positive, establishing ourselves in the present, and appreciating the kindness of others.

Additionally, saying thank you not only reminds you of your good fortune, it also nurtures your relationship with others and builds companionship.

Don’t underestimate these two little words – they hold much more power than we give them credit for.